Stay in your lane, swarm & synchronise. How to lead when it matters most 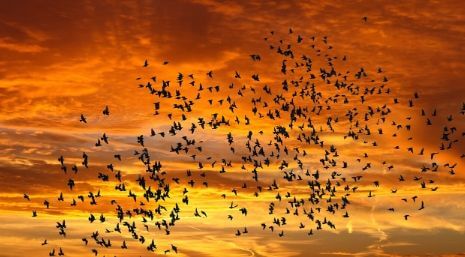 Like many conferences in 2020 the TCI OCEANIA CONFERENCE 2020 was an online affair.  Themed as ‘Leadership in times of crisis & what it means for cluster and network leaders’ it unpicked the learnings of leadership in a time of urgency. Leadership can be a difficult topic to neatly package and define with a raft of different styles and definitions. However, during a crisis, the role of leadership and group cohesion/decision is extremely acute. Equally leadership in cluster formation is crucial to its success.

The first speaker Eric McNulty framed his insights based on the Boston Marathon bombing which he said was one of the most coordinated crisis he has witnessed, especially in terms of how decisions were made. The nature of the Boston Marathon crisis had a high degree of complexity when it came to who was in charge with various officials from many different agencies. This got simplified into “We did it together”.

To explain this Eric uses the analogy of “Swarm intelligence” demonstrating how communities such as bees/ants achieve sophisticated social outcomes but adhering to simple rules, social cues and preserving the social unit.  Much of the coordination during the Boston Marathon bombing used the foundational requirements for a swarm to work. In Ireland, we see swarming in murmuring of birds and bees witnessed as a complex dance without them bumping into each other. In order to achieve a high degree of synchrony, swarming requirements include:

Eric highlights the importance of ‘Unity of Mission’ which in the Boston example was evident with people jumping in and helping as they were focused on the mission of saving people’s lives. This ‘Generosity of Spirit and Action’ saw the national guard and others provided resources on an ad hoc basis.  “People just start helping each other and this opened up opportunities for collaboration”. He also highlighted the need to focus on what you are good at and have skills in saying “Stay in your lane. Help others to stay in theirs.”

During the crisis a unified front was presented to the open world with conflict happening behind closed doors with an ethos of ‘No ego. No blame’. Mapping the learning for clusters he emphasised the importance of a ‘Foundation of Trust based Relationships’. “Build on smaller joint training, to build trust for bigger initiatives. Get used to working with each other to become a cohesive unit”. “Where you start from bottom up, and work on emotional intelligence” Eric explained “As long as you see hope and a better future, you get resilience and can help people ‘Bounce forward’, “.

In a crisis and clusters there is a need to move from leader as commander, to leader as Resilience Catalyst. This means helping people make sense of what is happening and find meaning in what they are doing. “Get people engaged in solving problems – where you invest in a larger mission and social cohesion, you create an unstoppable force”. Emotional intelligence is widely recognised a key trait of leadership, with the ability to build relationships of critical importance.”

Noting the significance of ‘Keep your Team’ and self help Eric said “Try to keep people ‘stronger for longer’ – it is not a sprint.  We all have limitations and need to take care of ourselves.” In a nod to his book ‘YOU’RE IT” Eric McNulty emphasised that the you can also be plural.

When asked “How do you build trust when there is money involved?” Eric suggested starting by asking how are you going to grow the pie and work through to how do you enter the arena in a collaborative way.  As trust is a key pillar of Cluster success he also quoted the ‘The Trust Equation’.

“The aim is to have a big number on top and small number on the bottom. It’s fine to compete on individual contracts the mission as a cluster should be to grow demand or a larger basket of products. If you think of non competitive spaces where there are benefits from factory standards to figuring out what the market wants, there are place where you can collaborate and it still makes sense to compete. This also involves navigating competitive tensions” he added.

On maintaining swarms and longer term recovery Eric noted that if any one of the components is missing the power of the swarm can break down. This can sometimes be due to new leadership. To overcome this he suggested having the key principals visible on a wall so that post crisis people can revert backwards.  This can help retain the collective cohesion.

Lessons for Clusters in Ireland

We use cookies on our website to give you the most relevant experience by remembering your preferences and repeat visits. By clicking “Accept All”, you consent to the use of ALL the cookies. However, you may visit "Cookie Settings" to provide a controlled consent.
Cookie SettingsAccept All
Manage consent

This website uses cookies to improve your experience while you navigate through the website. Out of these, the cookies that are categorized as necessary are stored on your browser as they are essential for the working of basic functionalities of the website. We also use third-party cookies that help us analyze and understand how you use this website. These cookies will be stored in your browser only with your consent. You also have the option to opt-out of these cookies. But opting out of some of these cookies may affect your browsing experience.
Necessary Always Enabled
Necessary cookies are absolutely essential for the website to function properly. These cookies ensure basic functionalities and security features of the website, anonymously.
Functional
Functional cookies help to perform certain functionalities like sharing the content of the website on social media platforms, collect feedbacks, and other third-party features.
Performance
Performance cookies are used to understand and analyze the key performance indexes of the website which helps in delivering a better user experience for the visitors.
Analytics
Analytical cookies are used to understand how visitors interact with the website. These cookies help provide information on metrics the number of visitors, bounce rate, traffic source, etc.
Advertisement
Advertisement cookies are used to provide visitors with relevant ads and marketing campaigns. These cookies track visitors across websites and collect information to provide customized ads.
Others
Other uncategorized cookies are those that are being analyzed and have not been classified into a category as yet.
SAVE & ACCEPT
Powered by